This weekend's Distance Summit did NOT start off the way I expected.

Why?  Most of the coaches present are what we call, ‘in pipeline’, meaning they are currently coaching kids at either the high school or collegiate level who are showing potential for future Olympic-level competition.  The rest of the coaches were representing Life Time Run and Another Mother Runner[2].

Click the link above, running events are listed first.  You can see that middle distance events (800m up to the 3k steeplechase), the US dominated the medal tables until the Soviet Union emerged.  The Soviet Union was overtaken by Kenya in the 1980s.  After the 1996 Olympics, Team USA instituted a lot of changes, and we are poised to dominate the medal tables once more.  No one is more excited about Tokyo 2020 than the good folks in Colorado Springs, especially now that those sneaky, doping Russians are out of the way[3].

You’ve probably seen “the pyramid” in Runners’ World.  Arthur Lydiard was the first coach to formalize year-round aerobic conditioning and development (early 1960s), and his pyramid still underscores the way coaches are trained today.  In the 70s, “Long Slow Distance” and ‘periodization’ came to define professional training programs worldwide.  No one questioned the need for a huge aerobic base in distance events.  Meanwhile, middle distance running continued to follow similar training patterns as shorter distance events, heavily focused on explosive power and strength. 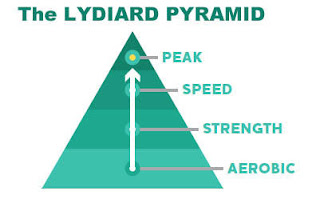 Then science happened.  In the early 1980s ‘interval training’ became a thing as we learned more about lactate and lactic acid, which confirmed the training theories of German coach Waldemer Gerschler back in the 1930s.

Here lies the problem: we weren’t sure how to use that knowledge.  What we did know was that Finland and New Zealand weren’t winning anymore[4], and we knew why but we couldn’t prove it yet.  So the pendulum swung the other way.  We went from “RUN MOAR!!!!!!!!!” to “RUN HARRRRD!”  For reasons no one can quite explain, volumes dropped as we moved up the pyramid. 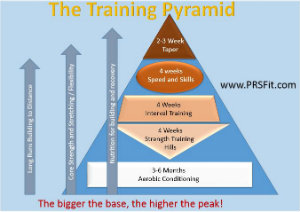 With the focus now firmly on how to do the bestest possible hard runs, aerobic development was almost completely abandoned in middle and short distances.  And the US went from ‘not doing well’ to ‘noticeably absent’ in the medal tables.  Something had to change.

Team USA hired a bunch of new folks, all of whom were like, “wanna improve? you can’t run less.  Ever.”  The training pyramid was literally flipped upside down and is referred to as a diamond.   Middle distance was told they had to train aerobically like a long distance runner AND explosively like a short-distance runner.   16 years later, this approach is paying huge dividends[5]. 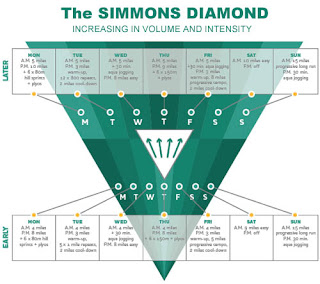 The line that stood out to me the most was from Clayton Murphy’s coach: “He came out of high school, training 20-30 miles per week.  You cannot do that to your athletes, it’s nowhere near enough aerobic conditioning for improvement.  It took a year to get him up to 70 miles per week, which is where he needed to be.”

Let that sink in: 30 miles per week wasn’t enough aerobic conditioning for a dude whose main event was the mile.  Just one mile.  He won bronze in the 800m in Rio.

I’m not saying I am about to triple your training volumes.  I am saying this: I know I ask you to run a lot, more than most of you have probably seen before.  I know the things I say run counter to what you’ve heard or read on the Internets.  I know my methods are, ahem, ‘unconventional’.

That said, when the panel asked, “do you think your runners do enough aerobic conditioning?” I was the only person in that room to raise my hand.  We may not be doing what everyone else is doing, but that doesn’t mean we are wrong.  Even if you are trying to get into the Olympics, the perfect interval workout is no more important than an easy effort run.

[1] Very gently, of course.  They were super-polite.

[4] This change had NOTHING to do with the 1980 Moscow Olympic boycott, or the use of anabolic steroids becoming the norm by the 1984 Games and peaking by the Seoul Trials in 1988.  NOTHING.  It was all intervals!!!!!  INTERVALS!!!!  Just ask any of the winners who had never won before!  INTERVALS ARE MAGIC!

[5] We can assume this is working, since we now know that WADA is basically useless.  Team USA has the highest doping standards worldwide, and we are beating notorious dopers.

Build: A Program for New Runners