Holding on With Both Hands

So on January 5th I woke up SO EXCITED.  Time to be back on my normal schedule!!!!!  Got the kids dressed, threw them in the car, drove to school and it wasn't open yet.  I figured I missed an email about beforecare being cancelled so I just drove laps around the school until I saw a mom in my neighborhood and rolled my window down to say hi....and found out there was no school that week.   I work from home, and trying to do that while the kids (5yo, 3yo and 20 months) are conscious is just impossible.  I need two (large) screens to see your Training Peaks properly, which means I'm bound to one place in order to update what you see in TP.  The last 2 weeks of December that room was mostly blocked due to the world's longest renovations, so last week felt like an insult on top of a huge imposition.

Not to mention, months ago I had registered for the American Distance Summit (http://www.distancesummit.com/Summit/Home.html) and the more I thought about how behind I was, the less I wanted to go.  2016 was my year of #allthelearning and I had attended clinics all over the country, including Lydiard and Daniels' certification courses.  Though I had learned a lot, I hadn't *Quite* gotten what I had wanted and had become a little (very) disillusioned in the process (which is probably why I have yet to complete the certification exam for either one).

Adding insult to injury, every single peer coach I met, some of whom are people I have admired for years, were just terrible.  After looking at samples of my work, they openly made fun of me for using heart rate monitors and not pushing my clients hard enough on hard run days without asking any questions about my target demographic.  It was like being in high school all over again, and THAT sh*t was traumatic.

You could say that most of last week, I was mentally adrift as I fell further and further behind. I know that it showed, and I am sorry.

On Friday morning I got word that two of our runners were featured in an article in Competitor Magazine (http://running.competitor.com/2017/01/training/is-your-mental-game-keeping-you-from-a-time-goal_160703) and I was STOKED.  A few hours later, my daughter looked at me with her big blue eyes and asked if we could go on an adventure. I said sure, let's go get lunch!  Her response wasn't particularly excited.  "Food isn't an adventure, mommy," she said. 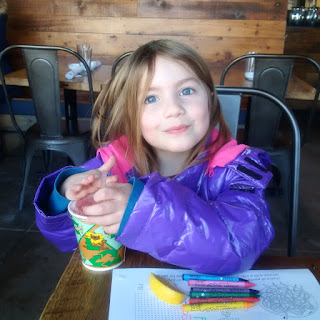 Could you say no to those blue eyes?  If so, DON"T TELL ME.

I gotta tell you, Cheyanne is a really cool kid and I enjoy spending time with her.  Over Shirley Temples, she asked me if I would miss her on my trip that weekend. I balked.  Said I wasn't sure I wanted to go after all, there would be really amazing coaches there and I was scared I wouldn't fit in, that it wasn't the right place for me and I think I'd rather be home with her.   "Where's my place, Mommy?"

I looked in those eyes and something snapped.  I don't remember what I said, but I'm sure it was mildly profane.  I texted my husband and told him I needed to leave by 4 if I was going to make it to the Springs before dark.  I called a friend in Monument and said 'hey, mind if Cheyanne spends the night with you?  Be there in an hour.' I texted my husband again and told him to pack an overnight bag for Cheyanne.

"Where are we going, Mommy?  Is the adventure starting?"

Yes, baby.  We're going to go fast so hold the Shirley Temple with both hands, please.

I had an amazing weekend.  I am bursting with energy.  The Summit was incredible. An Olympic distance coach called my sample plan, "f*cking brilliant."  We're BACK.

So hold on with both hands, please.  We have a big spring ahead.

I got several updates into TP last night and plan to do more tonight. I will let you know about makeup office hours and goal planning by EOD tomorrow.

Build: A Program for New Runners